“This incredible mandolin came to me through my grandfather.  I remember him playing it for me, my brother and sister, and my cousins when we were children.  It was after he died that I picked it up and began to learn to play it, learning to play music at the same time.  I have always played this mandolin — its voice is part and parcel of the thing that is my music — its sound is my sound.”  –Marla Fibish

Irish mandolin genius Marla Fibish may be relatively unknown outside California, but she certainly deserves fame for the warm, lilting lift she gives to traditional tunes. In recent years she has been playing out more, performing with her trio Three Mile Stone and teaching classes and workshops. Her new release “The Morning Star” finds Marla and her old Gibson mando taking a joyful romp through traditional tunes that include slip jigs, reels, polkas, waltzes, and planxties. The breadth and depth of this collection should finally bring Marla the recognition she deserves as a master of Irish-style mandolin. 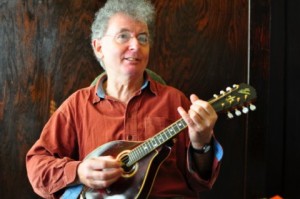 Marla teamed up with the legendary Jimmy Crowley to create this unique and delightful recording of Irish music played only on double-strung instruments. Though the world knows Jimmy as a great singer, this is an all instrumental album featuring traditional tunes of all sorts, along with an original or two from each of them, played on mandolin, mandola, mandocello, bouzouki, and a big bass bouzouki called a dordán. The project was hatched over an evening of playing tunes together at Marla’s house on one of Jimmy’s trips through the Bay Area back in 2009, and recorded in three busy days in April 2010. Fiddlefreak recommended!