If you’re not living under a rock in Greenland, you’re probably aware of Pharis and Jason Romero by now. NPR darlings from Horsefly BC. Makers of gorgeous banjos that are both rustic and refined. Two award-winning duo albums under their belts, and a couple of collaborations before that. Songs that mine the old-time tradition and blur the line between original and public domain. A smooth, vintage sound that could calm a drunken sailor. Or in their case–maybe a crying toddler. 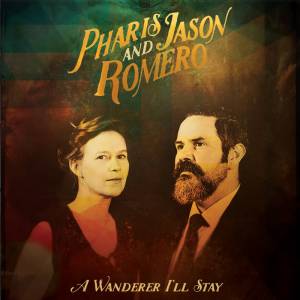 Their new album A Wanderer I’ll Stay continues to map the musical back roads of old-school acoustic Americana. Two tracks are instrumental compositions that explore the lush sonic landscapes of Jason’s gourd banjos. Their version of Cocaine Blues from Luke Jordan is dark and fun at the same time, and young fiddler Josh Rabie (Water Tower Bucket Boys) contributes nice textural tones here and there. Marc Jenkins plays pedal steel on Billy Mayhew’s It’s a Sin to Tell a Lie (1936), a recycled waltz melody that was played during the British dixieland revival in the 1950s and 1960s in a fast 4/4 tempo. This song was recorded by many others, notably Billie Holliday, Slim Whitman and even John Denver.

Throughout, Jason’s banjos simmer and swirl on a warm sea of vintage flattops, with tight two-part harmonies that can only come from partners that are devoted to the music and each other. More so than previously, the new album A Wanderer I’ll Stay leans confidently into original material while keeping the burnished sheen for which the couple have become known. Recommended!

LISTEN: It’s A Sin To Tell A Lie